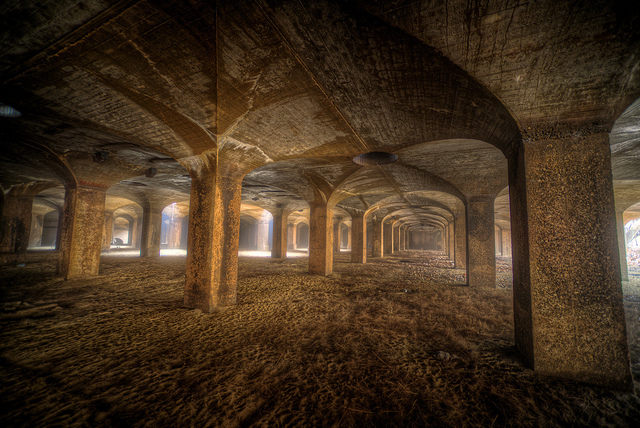 Discussions around what to do with McMillan Park awakened again in 2000 and culminated with a DC Office of Planning report in 2002.

The DC Office of Planning held open public workshops trying to ascertain what DC residents really wanted to see at McMillan Park. These conversations about the future of McMillan Park were in part grounded on the conclusions found in the structural engineering report paid for in the year 2000.

Surveys then, just as recent surveys now show that the vast majority of the public has always sought a redevelopment of McMillan Park retaining at least half of the open green space and saving all of the historic assets at the site. This falls in line with the restrictive preservation covenants that ride with the McMillan Park deed in perpetuity.

Clearly, the 2000 engineering report demonstrates that vast majority of the underground historic waterworks and water filter cells could be saved and reinvigorated for a price.

But the city has other plans, seeking to pave over 2/3 of the existing green space. 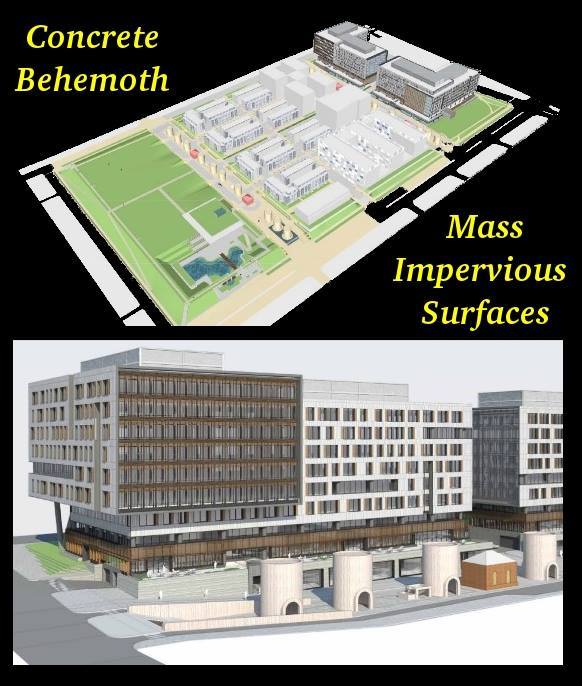 Some 14 years later, now we find the Mayor pushing for the proposed McMillan Town Center privatization plan and its two-million square feet of redevelopment, including trophy office space, condos, grocery store, and recreation center. This proposed redevelopment would result in the tearing out of more than of 90% of the McMillan waterworks structure.

The 2014 structural engineer produced diagrams and resulted in verbal testimony that the conditions at McMillan Park have largely remained the same as when it was studied in 2000.

However, despite the fact that conditions haven’t really changed at the McMillan waterworks over the years, the City’s newly funded consultants make completely different conclusions than those found in prior study, now saying:
1. The site’s structural integrity could collapse at any time, and
2. The historic McMillan waterworks cannot be saved except but for one and a half of the existing water cells.

The new claims about an imminently collapsible McMillan Park are now unflinchingly adopted by city administrators who are supposed to be taking care of this historic site.

And similarly, DC’s planning officials decry safety issues because the subterranean waterworks could collapse at any minute, even from people playing soccer on the McMillan field above (see video below).

Recent documentation received through FOIA shows that in 2013 DC Water had no concerns about investing approximately $15M dollars in ratepayer money to re-purpose the McMillan site as a stormwater surge recovery site.

And despite the rote statements adopted by those pushing the McMillan Town Center that the structures at McMillan now could imminently collapse, DC Water had no fear for their workers or the liabilities therein by sending folks into the un-reinforced underground water cells below McMillan Park to prepare the site as a stormwater runoff project.

As DC Water says, “Its fascinating as an engineer to go in and see the results of the construction [at McMillan Park] that was done over 100 years ago … to see the condition that they are in now, those fellows back in the day knew what they were doing.” Kevin Williams, DC Water Project Manager.

The McMillan Storage project is ongoing today and can collect up to three million gallons of runoff every rain event, thus mitigating flooding of Bloomingdale right now.

THE INTEGRITY OF THE MCMILLAN WATERWORKS AND THE STATEMENTS AS TO ITS EFFICACY IS ON THE TABLE. WHO AND WHAT DO YOU BELIEVE?

MR. RUIZ: I do not hold a
5 professional engineering license in the District
6 of Columbia.

Within these masses there is an array,
8 a 4 deep by 5 wide array of filter beds often
9 referred to as cells.
10 These unreinforced concrete structures
11 can individually retain a volume of water.
Within these cells there are over 200
20 columns each supporting a vault. In all there
21 are 4,000 of these vaults over 20 acres of the
22 underground cells.

page 92
I would like to give a quick brief
2 review of the structures and how they work. The
3 cells were constructed with unreinforced concrete
4 which means there’s no reinforcing steel in the
5 concrete.
6 Additionally there is no
7 waterproofing.

8 Also note that these structures are
9 over 100 years old. As I will show you these
10 structures have not fared well over their
11 lifetime and have moved and cracked due to a lack
12 of reinforcement.

2 The coloring of the cells represents
3 degrees of damage to these unreinforced concrete
4 cells based on surveys on current conditions, red
5 being the worst condition ranging to green having
6 minor damage.
7 As noted previously the conditions can
8 change without warning, meaning the green cells
9 could become yellow, yellow to red, red to
10 collapse.

4 Those three green cells are
5 uncompromised today, but it’s such a sensitive
6 structure that anything that we do is going to
7 compromise those to some degree later.

11 The safety issues are obvious when you
12 get on site. There are gaping holes along North
13 Capitol Street on the high side of the berm where
14 the structure has collapsed under its own weight.

13 A topside use scenario would require
14 complete removal of the soil above the cell and
15 replacing it with a new reinforced concrete slab
16 which would be designed to stabilize the
17 structure and to support light maintenance
18 vehicles and equipment on the new soil above.

D.C. Water currently
8 controls filter 14 and final determination of
9 cell 14 use cannot be made until after D.C. Water
10 vacates cell 14 and stabilization is in place.

12 This slide lists the numerous non13 structural challenges for reuse. The cells do
14 not have adequate ceiling height needed for the
15 insertion of services like water, sewer, and
16 other MEP services and be code compliant.
17 Removing the sand would not solve the
18 problem because of the need to reinforce the
19 existing foundations.

17 The existing vaults are unique in
18 their construction, but of very limited use
19 except as a relic of industrial archaeology.

1 We could save practically any of these
2 cells with different degrees of difficulty and
3 cost. However, occupancy of the vaults is not
4 feasible except at a very small scale and at a
5 high cost.

6 In conclusion, the proposed master
7 plan that has developed emphasizes the unifying
8 characteristics of the site, the above grade
9 features, the site organizational features, the
10 landscape characteristic known as the plinth, as
11 well as offering a complete interpretive
12 experience of the below grade structures for the
13 preservation of cell 14.
14 In addition, the integration and
15 adaptive reuse of cell 28 into the landscape
16 design can increase public awareness of the
17 uniqueness of this site.

page 105
10 DR. BYRNE: Your testimony would be
11 that it still would be extremely dangerous to
12 allow people down there because the unreinforced
13 concrete columns could collapse.
14 MR. RUIZ: Well, as unreinforced
15 concrete columns the —
16 DR. BYRNE: If the building wasn’t
17 coming down upon them it still could collapse
18 internally.
19 MR. RUIZ: Correct. And your reuse
20 scenario would require careful inspection. And
21 also introducing a vehicle into an unreinforced
22 concrete structure would be additional risk because of impact.

5 MR. RUIZ: My name’s Christopher Ruiz
6 with Silman.
7 MR. BYRNE: Thank you.
8 MR. RUIZ: As I testified previously,
9 regardless of the condition, any cells would
10 require significant stabilization.

16 MR. OTTEN: Okay. When you visited
17 the site and you looked at Cell 14, what kind of
18 intervention did you see D.C. Water do to that
19 cell to prevent it from shifting from yellow to
20 orange or collapsing?
21 MR. RUIZ: D.C. Water has not provided
22 any stabilization to Cell 14. It’s in its

2 MR. OTTEN: Okay. So if your
3 testimony is that the yellow suddenly collapsed
4 or shifted to orange or really loses its
5 structural integrity at any time because it’s a
6 reinforced concrete, why do you think D.C. Water
7 didn’t reinforce it and is using it actively?
8 MR. RUIZ: Because they’re using it as
9 it always was intended to be used, as a retention
10 of water. It’s an industrial structure that’s
11 being used as an industrial structure.
12 MR. OTTEN: But nonetheless, it is
13 reinforced concrete that can collapse suddenly?
14 MR. RUIZ: No, unreinforced concrete.
15 MR. OTTEN: I’m sorry, unreinforced
16 concrete. So they are knowingly using this
17 potentially that at any time it could collapse?
18 MR. RUIZ: Yes.
19 MR. OTTEN: And but some kind of
20 construction had to be done if water into the
21 cell? Like some cutting of the — did you see
22 any cuts in the side of the cell or the integrity?

4 MR. OTTEN: I appreciate that. Then
5 why would D.C. Water not do the exact same safety
6 precautions you’re describing right now? Could
7 not the cell collapse under the water projects
8 right now, with people walking by it and be
9 injured by it?
10 MR. RUIZ: That’s correct. As I said,
11 it’s an industrial site used for industrial use,
12 and is not meant for human occupancy. There’s an
13 understanding that you’re taking no risk.

5 MR. RUIZ: Well that’s correct. What
6 I said is you already have columns base of 14
7 feet on center, and putting additional columns in
8 it would create a sea of columns and thus you
9 would ruin the historic value of the structure.
10 MR. OTTEN: But it’s fair to say just
11 tearing out the vaults and throwing it in the
12 trash is also ruining the historic value of the
13 structure, is it not?
14 MR. BYRNE: That’s not really a
15 question. Obviously it is, right? I mean they
16 admit that it is.

Take our Poll to Participate in Protecting McMillan Park!